How to tell if the FED is pre-war

How can you understand that the FED was produced before the Second World War?

This article is devoted to the issue of determining the year of production of FED cameras of the first model (the index for the first model was not indicated – they simply wrote “FED”).

There will be no special revelations in the article, but such questions arise, and I have collected some information from the Web together.

Why is it difficult to determine the year of release?

But the FED of the first model did not have this system yet. The numbering was continuous. The numbers were just put in order. The numbering interrupted during the evacuation of the plant, after the Second World War, simply continued.

In the very first issues, the numbering was even more confusing, but these devices are VERY rare and expensive, so I will not even try to dwell on them. If you have found such a device and you have the required amount, then you know the question better than me.

Meanwhile, the demand for pre-war FEDs is always stable. This is understandable. The device is charismatic. The preservation of many of the specimens is extraordinary. And the main thing – the pre-war years – this is the raid of a completely different era. At the same time, the prices, although not small, are far from antique. In general, a popular choice for a collection.

First, I’ll tell you how you CANNOT distinguish between the pre-war FED.

Not an option? But, this is a false path.

In 1948, the production of cameras was resumed in exactly the same appearance in which it stopped during the evacuation, that is, with the old set of shutter speeds and the letter Z.

The new standard for excerpts was introduced in 1951-52. This means that more than 100 thousand copies were released after the Second World War, but with the letter Z.

The same situation with the release button – solid without a cable slot. The cable slot was introduced at the same time as the new shutter speed standard. A flat button is not a sign of the pre-war model.

Here I have to make a reservation right away. Alas, pre-war FED devices are often counterfeited.

Instances of the mid-50s are now worth a penny. It is not difficult to change the appearance of the apparatus so as to give it some sign of the pre-war model. For example, you can simply rearrange the engraved top cover from a poorly preserved pre-war camera to a later one.

At the end, I will attach scans from the book, which will allow you to pay attention to some details, but in general, I personally do not undertake to distinguish a good fake.

Even if we are not talking about a fake as such, the devices are often “restored”, i.e. change parts damaged by time to similar ones from later models. This hybrid is called “cutlet”. Meanwhile, experts distinguish between the details of specific models down to the shape of the screw heads.

Often a faulty, corroded apparatus with a full set of original parts is more valuable than a beautiful, serviceable “cutlet”.

Everything that is written in this article can only be used if you are sure that the device is genuine and has not been subjected to barbaric restoration.

Numbering, engraving and year of manufacture of FED cameras

To understand that the FED is pre-war, you need to look at the engraving on the top cover.

I found such a wonderful table on the Web, which contains samples of engravings and serial numbers and year of manufacture.

It should be borne in mind that such information is collected by communities of private collectors, often on indirect grounds. There is no official information. The plant’s archives were badly damaged during the War. The company itself does not make efforts to restore the history of the production of cameras. Therefore, of course, there are errors in such generalized information.

A number of sources attribute another type of engraving “FED plant named after FE Dzerzhinsky, Kharkov” to the pre-war signs. In the table, it is marked with the year 1946. The materials on the Web strongly contradict each other and themselves in this part. I received advice from an experienced professional. Below is its explanation.

This engraving does indeed belong to the pre-war period. Well, or, if we’re absolutely certain, it’s not pre-war, but rather military. It was applied in 1941 just before the evacuation of the plant. Some of the devices were so marked already during the Second World War. Only about 10-12 thousand devices carry this marking. The last pre-war number can be considered some kind of near (slightly more) 183000. Post-war numbering, apparently, began with 200000 or so.

So, before the Second World War, there were only 4 types of mass engravings. Perhaps there were non-standards – festive and the like.

The earliest type of “ФЭД Трудкоммуна им. ФЭ Дзержинского Харьков” (FED Labor Commune named after FE Dzerzhinsky Kharkov) was applied to devices up to number 6000, these devices are VERY rare. The chances of meeting this are almost intangible. 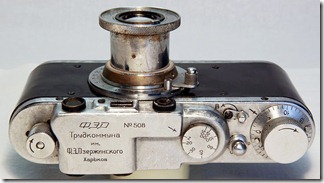 Therefore, from a practical point of view, we are only interested in 3 types:

This is the most common and reasonably priced type.

Эту же гравировку имеют аппараты ФЭД-С, которые выпускались только до ВОВ, после — нет. The cameras FED-S, which were produced only before the Second World War, after – no, have the same engraving. 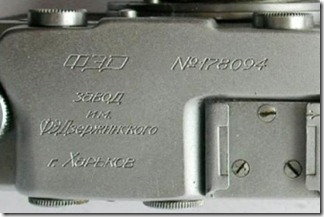 In general, the price for late pre-war copies depends more on the safety of the device, the presence of a case, box, passport, etc.

If you need to determine the release period more precisely, up to a year, then I can offer such a table from the Web. Look at the number on the device and check it.

Please note that the sources I have cited are a little contradictory. Nobody knows where the truth is. Both sources of numbers in the region of 175,000 – 183,000 are classified as post-war, but I can assure you that they are pre-war.

In general, it is clear that no one at the plant tried to time the round numbers by the end of the year. Therefore, there may be errors in the border areas of the intervals.

Berdsk FEDs exist, but they were produced after the Second World War. Their production began approximately in April 1946 and with a number of 200,000. 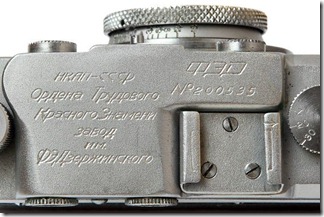 These cameras are often referred to as RED FLAG. In January 1941, the plant was transferred from the NKVD system to the subordination of the People’s Commissariat of the Aviation Industry (NKAP), hence the name. In the evacuation, the plant served the needs of the aviation industry. Cameras were not produced during the Second World War. By the way, the top plate is generally silent about such an engraving. There were about 2,000 devices produced with such an inscription in total. They are very rare and very expensive. Beware of counterfeits.

Again, these are post-war devices, but their collectible value is incredible. And I will repeat myself, there are no Berdsk FEDs with engravings not “NKAP”. Although on Avito, EBay and other sites, every second is called “Berdsk”.

In 1948 the restored FED plant resumed its work in Kharkov. The devices were numbered from 210,000. The engravings were like the 5th type on the first plate. Rounded logo with the words “завод им ФЭ Дзержинского” (FE Dzerzhinsky plant). A little earlier, around 1947, the production of FED devices began at the Krasnogorsk plant. But that’s another story.

Finally, here’s another thing. If you buy a pre-war FED, don’t forget to pay attention to the lens.

Before the Second World War and some time after the Kharkiv residents completed their cameras with lenses of their own production under their own FED brand. 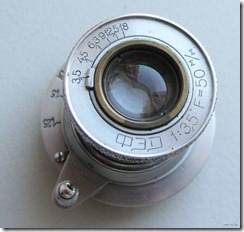 The pre-war FED 3.5 / 50 lens is an independent collection value, therefore, it is highly likely that the seller will try to replace it, for example, with a similar but low-value Industar-22. Be carefull.
If you are not interested in the basic FED, but FED-S, then I have a detailed review of it, in which there are many photos from different angles. The review is interesting, I recommend it.

Now that’s exactly it. Further, I cite excerpts from the book “1200 cameras from the USSR”, which clearly shows the external changes that FED underwent with the passage of time.

If you are going to purchase a device, then perhaps knowing these details will help you recognize a fake. See the number on the case, see the appearance features that correspond to this number (interval).

That’s all for me. Good luck.