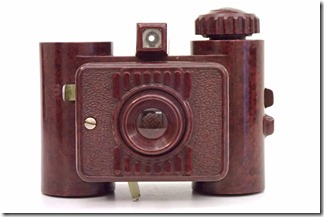 Today we will consider a very interesting camera. It will be a Lilliput.

Lilliput is a miniature, extremely simple pre-war camera. It was positioned as a child’s, that is, it was, practically, a toy. However, this is not an imitation, but a full-fledged camera.
Lilliput is an almost complete copy of the German Sida Standard camera. Both photos from the Wiki. 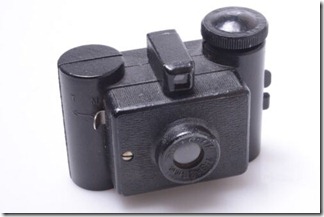 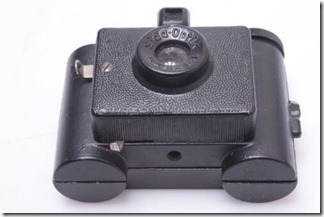 Despite its diminutive size, Lilliput is designed for standard film type 135. There is, however, an important point. The film is still needed prepared – with a paper leader laid along the entire length, as on type 120 medium format film. 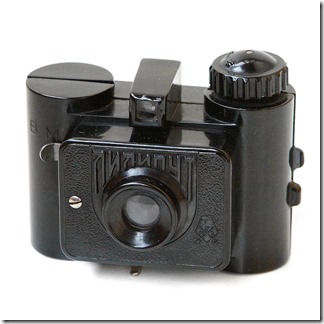 An early version of Lilliput with the GOMZ name and logo on the front panel had a black case and was produced from 1937 to 1939. Photo from fotocataloque.ru. The devices of the first version were also produced with a red-brown body color, but such specimens are very rare. The second version of the device appeared in 1939 and was produced until 1940, that is, until the release of the Camera Malyutka (“Малютка” – it means “baby” in russian), which replaced Lilliput. We’ll look at the Camera Malyutka later. 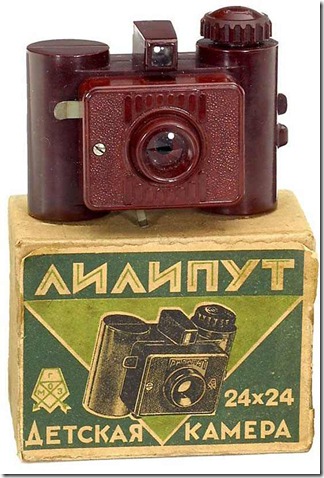 In the second version, the name is applied to the back wall, and the company logo is replaced by the inscription «ГОМЗ» (“GOMZ”). Photo from photohistory.ru.

The second version of Lilliput came in black or brown. Now browns are more common. There is a version that the enterprise, having mastered the production of dyed bakelite, abandoned the black color.

According to the Soviet photo-historian A. A, Syrov, in 1937-38, about 20 thousand Lilliput devices were produced. For 1939, it was planned to release 120 thousand copies. Whether this plan was implemented is unknown.

Now Lilliputians are quite rare, however, their offer (mass variants) cannot be called unique either. It is more difficult to find a copy in good condition. The device is very fragile.

Now we will look at the camera of the second version in excellent condition in a brown case.

Lilliputian was produced at GOMZ from 1937 to 1940. The exact volume of the issue is unknown: from several tens of thousands to hundreds of thousands of copies.

The device is for children, extremely simple.

Designed for standard 135 type film, but only 12 frames can fit into the device, and in addition, the film must be specially prepared by laying a paper leader with frame numbers along its entire length.

Reels of film equipped for Lilliput were on sale, but I think they were in short supply. Perhaps, amateur photographers more often loaded the reels themselves, unwinding the pieces from the standard ones and laying them with the used leader.

Printing photos from Lilliput’s films was possible with the help of a special photo-magnifying attachment, which used the front of the device as a lens. So it was possible to get photographs up to 62×65 mm in size.

I could not find any images and I think this device was also very rare. 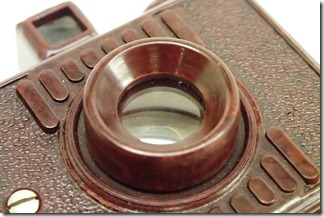 Lilliput’s lens is a single-lens “monocle”. Aperture f9. The diaphragm does not change.

Focal length 38 mm. The effective focal length of the Lilliput lens in the equivalent of 35 mm photographic film is about 48.4 mm.

The lens is rigidly focused at the hyperfocal distance. The nearest border of the DOF is 2-3 meters away. 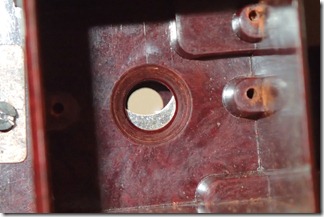 The shutter is single-leaf (sector), lens-type, without preliminary cocking. In fact, the shutter is a plate with a hole corresponding to the diaphragm. When you release the shutter, the plate rotates and blows the hole past the lens. In this photo, the shutter is in an intermediate position and the edge of the hole is visible.
Lilliput’s shutter beats one automatic shutter speed M ~ 1/15 (according to other sources ~ 1/30) and manual В (V).

It looks tiny even next to FED devices, which themselves were miniature cameras in the late 1930s. And what about the comparison with the Tourist or even Photocor, which were massively used and were not considered particularly large. 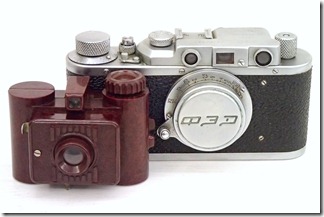 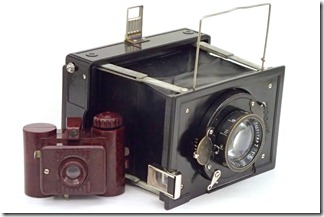 During photographing, Lilliputian was recommended to be held vertically. From the point of view of framing, it doesn’t matter, the frame is square, but it is much more convenient to hold the device this way. 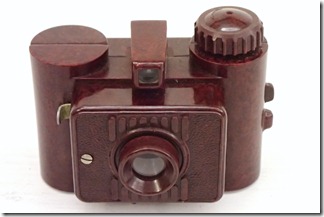 To broach the frame, Lilliput has a massive head at the top of the case on the left. The film in the machine moves from right to left. 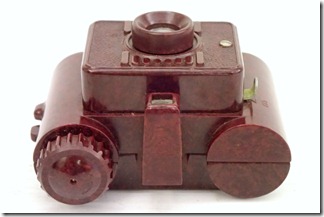 There is no frame cutoff. The user needs to control the advance of exactly one frame and the number of frames taken by the numbers appearing in the round window on the back wall. 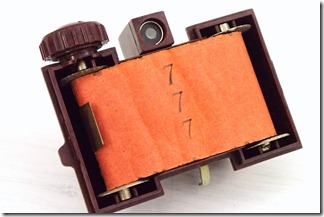 These numbers are imprinted on the paper leader, which the film is laid with during winding. Exactly the same principle is implemented on some medium format devices.
In my copy, there was an original leader on the reels. Unfortunately, this is not an equipped film of those years, but only a paper cover from it. Nevertheless, everything is clear enough. 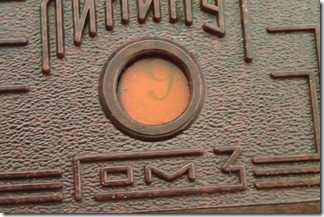 In this photo, the ninth frame number is visible in the window.
Here is a large photo of the coil. 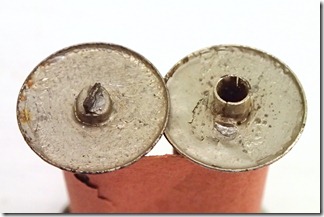 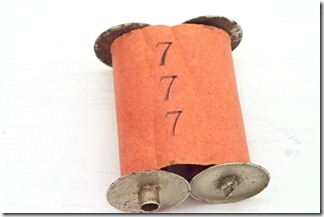 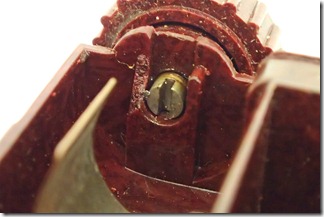 When installing the take-up spool, the ridge on the spool must fit into the groove in the pin of the feed head. 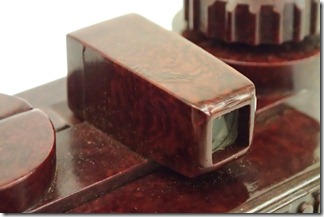 An optical viewfinder of the “Alibada” type with a magnification of 0.6X is installed in the upper part of the device. The body of the viewfinder is long and tapers towards the front, making it even more fun to look at.

The picture given by the viewfinder is tiny, but completely bright. 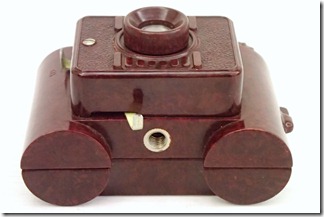 At the bottom, the designers did not forget to place the tripod socket. However, the Lilliputian will not stand on a standard tripod. Firstly, the socket is clamped on all sides by parts of the body, and secondly, the thread in Lilliput’s socket does not coincide with the 1/4 inch thread – the diameter is even smaller.

Shutter speed switching is carried out by the L-shaped bar located on the right. If the bar is recessed, the shutter will operate automatically. If extended – manually. 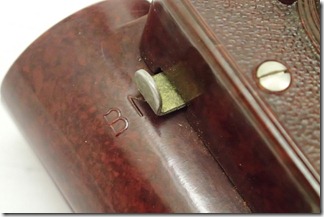 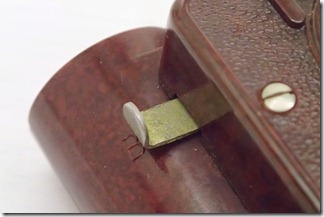 The shutter of the Midget does not need to be cocked beforehand. This happens when the trigger lever starts moving. 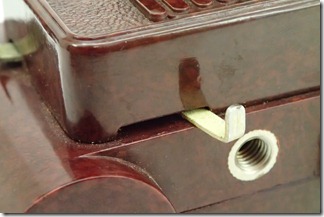 The trigger is at the bottom. It is also L-shaped, but it does not need to be pulled and pushed, but tilted in the plane of the film from side to side.

A very interesting feature is that the lever has no home position. The shutter will release the same when you move the lever both from left-to-right and from right-to-left.
If manual exposure is set, then when the lever is tilted to one side, the shutter will open, and when returned back, it will close again.

These are the simple manipulations when shooting.

It is necessary to open and close the Lilliput very carefully so as not to chip off the ancient and very fragile Bakelite body. 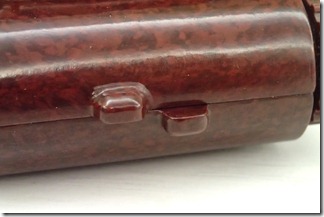 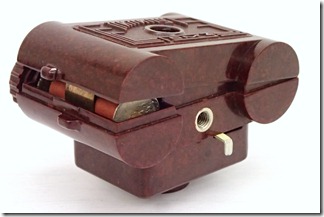 There are two ears on the left side of the case. They need to be pressed so that the halves of the case separate. 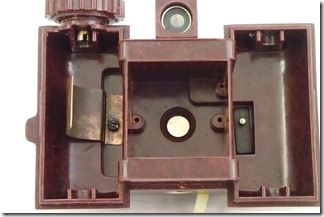 Lilliputian is an unusual and very charismatic apparatus.

Still, being able to carry a camera in a trouser pocket for the 30s was cool. And this opportunity could come in handy not only for children.