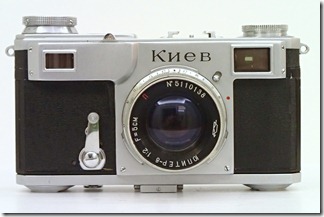 Today we will look at the Kiev-2 camera. Index “2” should not be misleading, Kiev-2 is the first rangefinder launched by the Kiev Arsenal plant.

Why number two? It’s simple, Kiev-2 is a complete analogy of the German Contax-2. Complete so much that many key components of the apparatus are interchangeable. 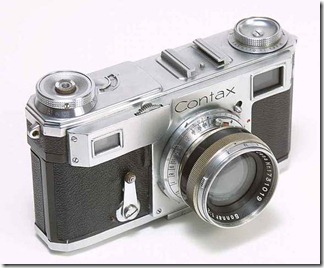 The USSR received the rights to manufacture German cameras along with documentation, equipment and a stock of components for reparations after the end of the Great Patriotic War.

You can even say that Kiev is not a copy, but a German device produced in the USSR under an official license.
There is information that for some time cameras with the Kiev logo were produced not only from the stock of ready-made parts Contax-2 and Contax-3, but also in Germany itself.

It is believed that Kiev-2 has been produced since 1947, but it was only in 1949 that Arsenal began to produce all the components on its own. Prior to that, the Arsenal used components, including those made in Germany.

At the same time, German specialists consulted the designers of Arsenal and helped them set up production.

For the late 40s and early 50s, Kiev-2 was simply an unrealistically cool device in terms of technical excellence and functionality. With all due respect, the first post-war Zorki and FEDs looked simpler.

It is interesting that although the line of classic Kiev rangefinder devices includes several models, Arsenal for some reason did not advertise the change of models with any indexes in the names on the bodies of the devices.

In the photo Kiev-2 and Kiev-4M. And how can you see it? Only the name “Kiev” is written.

The Zorkikhs and FEDs actively used both numerical and additional letter indices, and all this was indicated on the device itself, and not only in the passport.

It should be noted, of course, that Kiev rangefinders developed rather sluggishly.

And find, as they say, 10 differences?

In general, the most noticeable difference is not the result of progress. These are just slightly different camera lines. Otherwise, the difference is minimal.

Let me remind you that an attempt at a radical improvement in the form of the Kiev-5 apparatus, although it was ambitious and at the same time, in general, successful, but did not pass the test of time. Arsenal ended up folding Kiev-5 in 1973 and reverting to the traditional scheme from the 1940s.

But let’s not be distracted from the hero of our review.

This is a very interesting and unique type of attachment. I have a separate article about him, where everything is described in detail.

Shutter – curtain with vertical movement of the curtains.

The device has a self-timer, but the synchronizer does not. The Kiev synchronizer appeared only in the Kiev-2A model in 1956.

The weight of my copy without the lens is 590 grams. 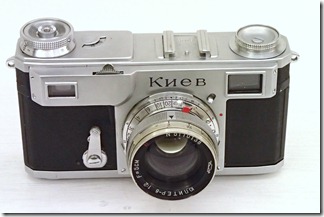 In front, in addition to the lens and the distance and depth-of-field scales located on the mount, are located from left to right:

But because of this, the middle finger of the right hand constantly blocks the rangefinder window. You need to get used to correctly placing your fingers on the body. And, for my taste, right – not always comfortable.

The self-timer start button is hidden under the cocking lever. 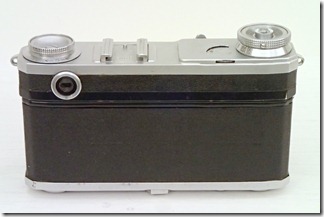 Behind – only the viewfinder peephole. The rear panel of the device above the removable cover is also covered with soft leather. The skin seems to be natural and pleasant to the touch.

But what can I say – the front half of the case is covered with suede from the inside. Very stylish.
It was interesting for me to compare the viewfinders of the 51 and 81 models. The intrigue fell apart before it began. I did not see the difference. The viewfinders are the same.

But if for the 80s the Kiev viewfinder was average, then for the 50s it is just excellent. It gives a not very large, but decent size picture. The main field is slightly darkened. The rangefinder area in the center is simply gorgeous. Large, rectangular, light.

Combined with a wide base and a bayonet design that ensures high accuracy, using the Kiev-2 rangefinder is a pleasure. 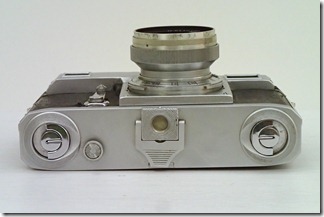 Below the camera are located: 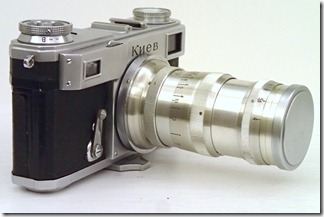 The folding stop is a convenient device that is found on only a few Soviet devices. With its help, you can even place the device on any firm horizontal surface, and it will not “bite” even with a long and heavy lens attached. In the photo Kiev-2 stands exactly with the Jupiter-11 lens.
In later models, the stop was abandoned, apparently because tripods became more common devices.

The shutter off button has disappeared on later models. Although the shutdown mechanism itself remained the same, the shutdown was performed not by a button, but by moving the right lock to a special position, in which it pressed inside the device on something like a pedal. 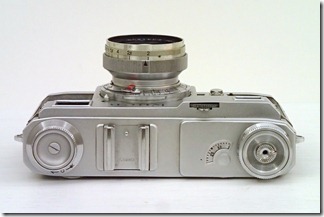 Above, from left to right, are visible:

This only works for internal mount lenses. With others, such an operation is not recommended – too much stress on the mechanics.

Overall, the feature is more fun than really useful.

The operation of the Contax-Kiev bayonet is described in more detail in a separate article. I will not delve into this issue here.

The head for cocking the shutter and transporting the film is large and convenient. 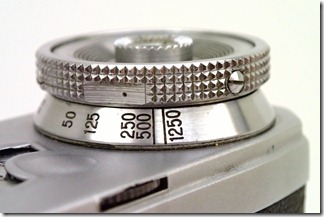 The exposure scale on Kiev-2 is marked with rather small numbers. It is located at the base of the head and is partially overlapped by the relief of the head.

Short excerpts are heavily loaded in one place, but others are scattered all over, practically, a circle and they are not visible all at once.
The index that needs to be set in front of the selected exposure is very small and not in a very convenient place. Getting them into the required short exposure is not a very simple exercise.

In general, it is really difficult for me, as a bespectacled person, to cope with the excerpts of Kiev-2. The design of the head of Kiev-4M looks like a breakthrough. 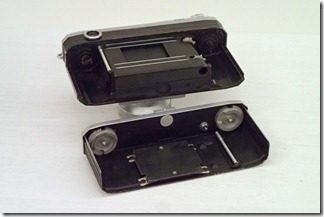 To load the film into the camera, you need to turn the two locks from below and remove the back wall. Further, everything is typical.

Kiev-2 is very similar to the Kiev-4M I reviewed earlier. But the second model comes from a completely different era. For the 50s, Kiev-2 was an incredibly technological apparatus.