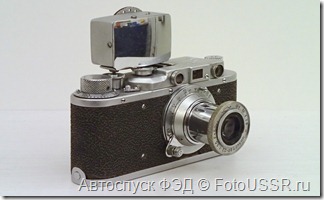 The selfie craze started around 2010.

Nowadays, self-portrait photography is already strongly associated with electronic gadgets. It’s even hard to imagine that in the 30s-40s of the last century, there was equipment for taking selfies.
Today we will consider a very interesting and rather rare device – the FED mirror self-timer.

As a small digression, I will say that the pre-war FED cameras (which, by the way, are an exact copy of the German Leica II), had a wide assortment of various accessories of the same name brand.

These accessories made it possible to expand the functionality of the camera to such limits that the line between pre-war technology and the technology of the 80s is practically erased.

Now all these devices are rare, and few people know.

What can be cited as an example?

For the FED camera before the Second World War, specialized macro-objects FED-macro 3.5 / 50 were produced. In the USSR, there were only two special macro lenses. The second is Volna-9.

How do you like macro photography with a rangefinder?

For FEDs, there was a special mirror attachment, with which, together with the GOI 4.5 / 300 lens, the device turned into a Photosniper.

Well, I think many have seen the branded (marked with FED) photo clamp.

And today we will talk about another device specially designed for FED devices – a mirror self-timer. 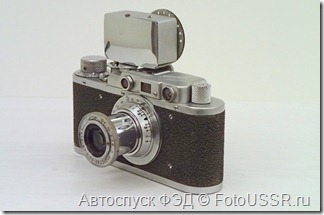 Mirror self-timer is called because its front surface is a slightly convex mirror made of polished metal.

The mirror is needed for framing when shooting a self-portrait. Such mirrors are still used on selfie sticks. 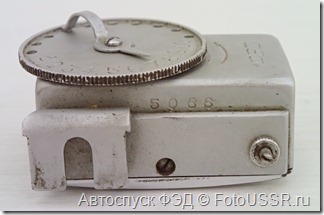 At the bottom of the device there is a foot for attaching to the flash bracket on the device and a pusher of the shutter release button.

The self-timer is designed ONLY for FED cameras, and only for the very first models without numerical indices.
On other devices, the device simply does not fit correctly.

In fact, everything is even more complicated. Among the FED models without a numerical index, only the very first – pre-war editions are compatible with the device. Those that do not have a cable slot in the button.

In order for the pusher to press the button, it must have a flat surface – without a depression. 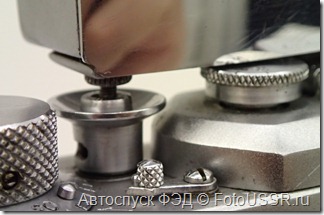 Strictly speaking, the 1947 model in the photo is not suitable for working with a mirror self-timer. My FED has a button with a socket.

But otherwise, from the point of view of geometry, everything is authentic. The self-timer will work if the cable slot is blocked, for example, with a lump of foil.
In the photo, such details are not visible, so the pictures completely convey the picture as needed. 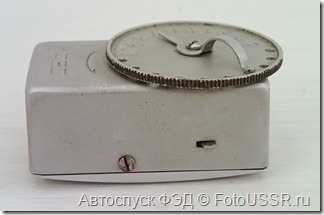 On the top edge of the self-timer there is a release lever. Behind a large winding wheel with an arrow. Here is another useful self-timer function.
The device can not only press the release button of the apparatus, but also hold it pressed for the time specified by the arrow – from 1 to 10 seconds. 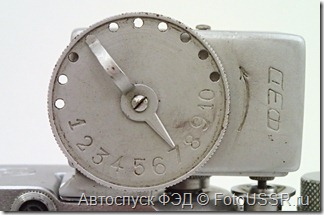 This means that with the help of this device it was possible to work out long exposures with great accuracy, which the shutter of the apparatus did not have.
What can you say? In the 90s, I would not refuse such functionality … You can, of course, count seconds to yourself, but this is much more convenient and more accurate.

How to work with the device? 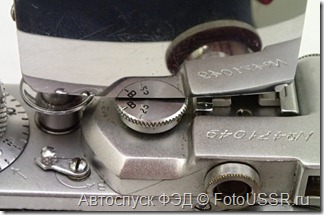 If the device is to be used only as a self-timer, the required shutter speed is set on the device itself.
If we want to use the long exposure function, set the exposure to B.

We install the device in the bracket. We make sure that everything is level and the pusher rests against the middle of the release button. 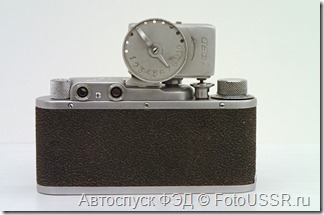 Next, you need to start the clockwork. To do this, rotate the wheel in the direction of the arrow. You need to make a little more than one turn. The end of the move is well felt.

The wound wheel comes back a little and is fixed.
The delay time for the descent is not adjustable and is approximately 6-8 seconds.

If we use the shutter speed of the apparatus, the arrow needs to be set at 1 second. If a long exposure will be fulfilled, turn the arrow by the required number of seconds.

Next, we press the release lever and stand at the desired distance in front of the apparatus. Looking in the mirror, we take the desired pose. 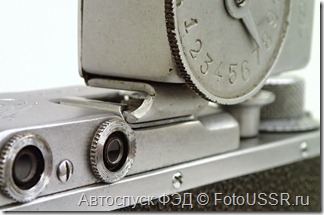 After pressing the lever, the clockwork begins to spin with a whirring, and the pusher begins to slide out smoothly. The pusher presses the button exactly smoothly.
In the lower position, the pusher is fixed for a predetermined number of seconds, after which it bounces back sharply. At exposure B, the shutter closes.

That’s all for me. Good luck!