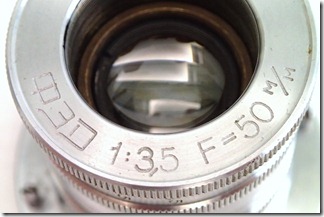 In the USSR, there were only two specialized macro lenses. We have already considered one of them, this is Volna-9 2.8 / 50. This is an M42 threaded lens and was produced in the mid-80s. Today we will talk about the second lens, which was the first chronologically, it will be the pre-war FED-19 3.5 / 50 lens.

By the way, on the site of Georgy Abramov there is a mention of the project of another macro lens – Industar-49 3.5 / 25. Photo from photohistory.ru. The lens was developed at KMZ for Zenith devices with M39 thread. The lens did not go into the series. 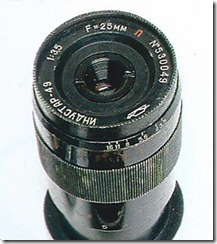 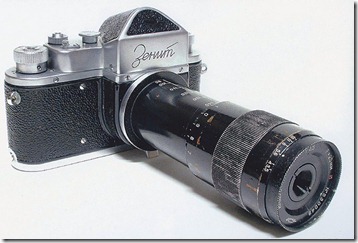 Once again, I express my surprise and admiration at how complete and thoughtful was the set of optics for the pre-war FED cameras. Not even forgotten about the macro lens. Which, by the way, was incidentally the only macro lens for rangefinder cameras in the USSR. 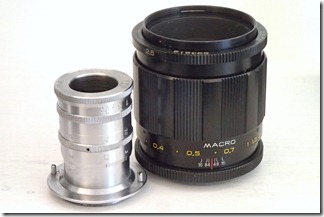 Macro DSLRs are easier because they can use extension rings. Whichever ring you put on, both frame boundaries and focus are directly controlled.
For rangefinders with rings, everything is not at all easy. And therefore, in the absence of duplicating equipment and system SLR devices, a lens adapted for macro rangefinders was very important in those years.

FED-19 was produced only before the Great Patriotic War. During the evacuation of the plant, all production was curtailed, and after the end of the Second World War, replaceable optics for FED devices were not produced.

There is very little information about FED lenses. I do not know the years of production of the FED-19, nor the volumes.

Those copies of the instructions for the lens that came across to my eyes are entitled with the name of the enterprise: “Kharkov NKVD Combine named after Dzerzhinsky “.

I will assume that such lenses were produced in this interval. On the Web, there is a mention of the start of production “in the mid-30s”. It is also possible that FED interchangeable optics were produced when the enterprise was already called a plant. This shifts the finish of the issue by a few months, but still within 41st.

According to my subjective feelings, FED-19 objects are less common than models FED-35 and FED-36, but it is also logical if fewer of them were released.

There are several versions of FED-19. The prototype had a larger diameter, but a similar aperture of f3.5. Photo from photohistory.ru. The prototype is on the left, the production version is on the right. 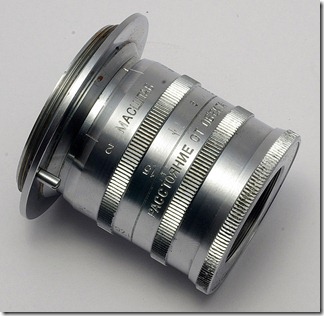 For serial lenses, the inscriptions «МАСШТАБ» (SCALE) and «РАССТОЯНИЕ ОТ ОБЪЕКТА» (DISTANCE FROM OBJECT) were first applied to the frame. Photo from photohistory.ru. Later, these inscriptions were replaced by the letters “M” and “P”.
Lens-FED-50-makro-3 Later, the frame was completely changed and the lens became similar to the standard FED 3.5 / 50. Photo from photohistory.ru.
In the review there is a specimen with a cylindrical body and the letters “M” and “P”. The lens is in excellent condition and is numbered 11896. 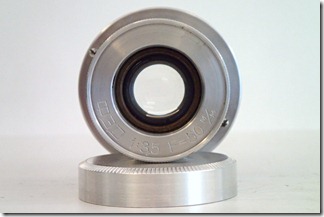 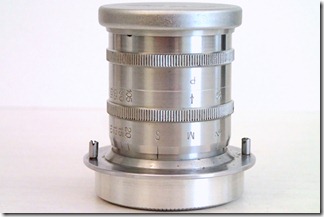 At the base there is a flat shoulder strap with two leashes, double knurling for focusing and a diaphragm control ring farthest from the camera.

The assembled lens is excellent. The body, as far as I know, is brass, but chrome-plated and therefore light.

The focusing ring rotates by more than 300 ° and between the extreme positions the lens length changes almost twice – by about 3 cm. 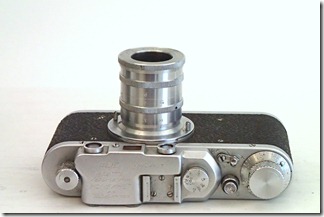 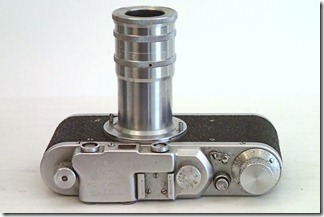 The focusing scale contains 2 rows of numbers. Closer to the apparatus, there is a scale of scales from 1:20 to 1: 2. It is marked with the letter M. 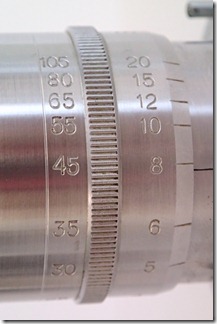 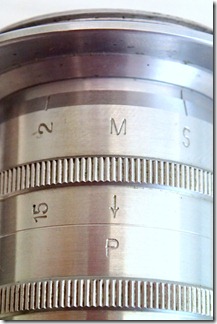 A little further – a scale of distances from 105 to 15 cm. This scale is marked with the letter P. There is also an infinity sign on the scale. 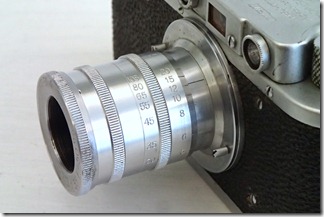 The highest magnification that this lens allows is 1: 2 and you need to shoot from a distance of 15 cm.
It is important that the distance should be measured not from the film plane mark, as usual, but from the annular mark on the lens, to which the arrow points. 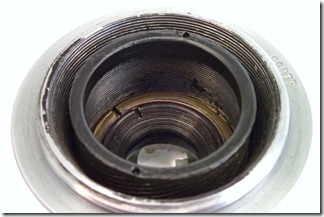 The lens does not have a rangefinder pusher, which is useless at such small distances and for correct focusing, the distance must be measured with a ruler or other similar device. 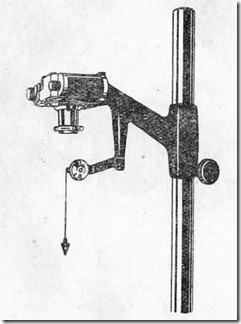 To carry out reproduction work, the Combine produced such a device. Judging by the image, it at least solves the issue of centering the axis of the lens and the object being shot. Surely the parallelism of the plane of the film and the object is ensured.

Perhaps in the same way, setting the desired distance is somehow facilitated.

Judging by the orientation of the letters, the lens was adapted for top-down photography. However, the numbers on the scales are marked in such a way that it is more convenient to read them, holding the objects horizontally with the optical axis.
There is no depth-of-field scale on the lens. Nevertheless, this parameter must be taken into account when shooting macro, and for this, such a table was attached to the lens. Image from sovietcams.com. 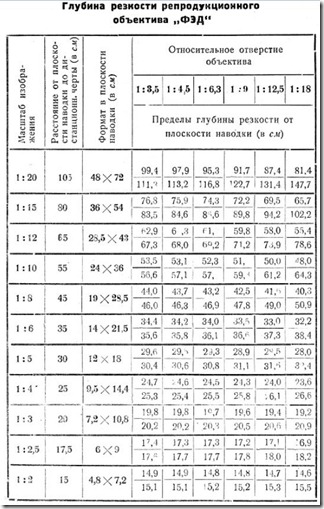 The table on the left shows the main values of the scales of distances and scales.

To the right is the format of the area that will fall into the frame at a given distance. This is irreplaceable information, since otherwise it is impossible to find out what is entering the frame from such a distance and what is not.

In the body of the table, in the form of a fraction, the RIP distances are recorded in centimeters from the aiming plane. It can be seen that the calculation standards are not very strict. The scope of the DOF is very wide.

Again, you need to measure the distance from the ring mark on the focusing ring, and this risk moves further / closer when focusing. In addition, the aperture scale also rotates when focusing, and if the camera is mounted on a tripod, it can be problematic to look at the scale.

Therefore, the order of actions had to be as follows: 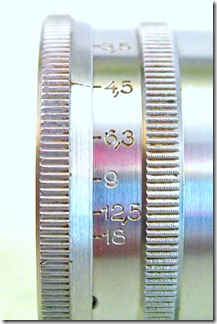 The maximum magnification that the FED-19 gives is a 1: 2 scale. Recording 1: 2 means that the size of the image on the frame of photographic film will be half the actual size of the object.

This is a normal indicator, Volna-9 gave a similar maximum scale. The 1: 1 ratio was provided by macro rings only.

There is an infinity sign on the scale. As far as I understand, the lens can be used at normal distances, but the scale segment from 105 cm to infinity is very short and not marked. And the FED-19 does not have an interface with the rangefinder.
In general, of the real options, only focus on infinity. 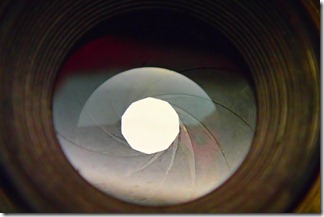 FED-19 has ten diaphragm blades and they are well blackened and matted. 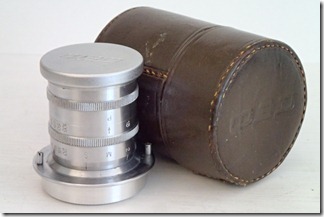 The lens is stored in a cylindrical brown leather tube with an embossed FED inscription. Perhaps there were other options for the cases.
Front and back covers are metal.
There are no obstacles to testing the FED-19 on a Nikon DSLR. The lens performed quite well. Such a task as the reproduction of stamps, for example, he solves perfectly. 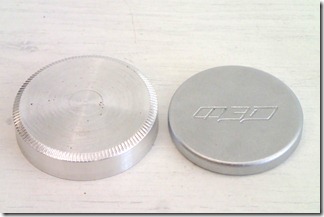 This photo of part of the text of the instruction was sent by Alexander Ovsyanko, for which he is very grateful.